5 Reasons to avoid WLS SAF Agents within your FMW Architecture

I know that this is quite an extremist title, and my colleagues will surely get a good laugh out of it since we actually just had some quite interesting experiences with SAF.

That being said, this post is not intended to bash this technology or to say it does not work (because it actually does); it’s just that if you look at the current technological landscape there are so much better options, and at least for me, from an Architectural point of view, it would be really difficult to justify deploying a SAF Agent (or WLS JMS Bridge) based solution into a production environment.

So, my hope is that if you’re considering SAF as your way to go, the following five reasons compel you to rethink your solution, take a long look at service-orientation design priciples / patterns and possibly spare yourself some major stress and hair-pulling. This is especially true if your organization is already in version 11g / 12c and even more if SOA Suite, OAG or any other advanced integration technology is available to you. Let’s dive straight into those points:

Take a look at the image below, a very clear Do / Don’t picture if you take into account what was just discussed. If you need to communicate those domains, keep it simple and just make sure to apply the service orientation principles to a meaningful extent whether you design your solution to push, pull, broadcast or else. 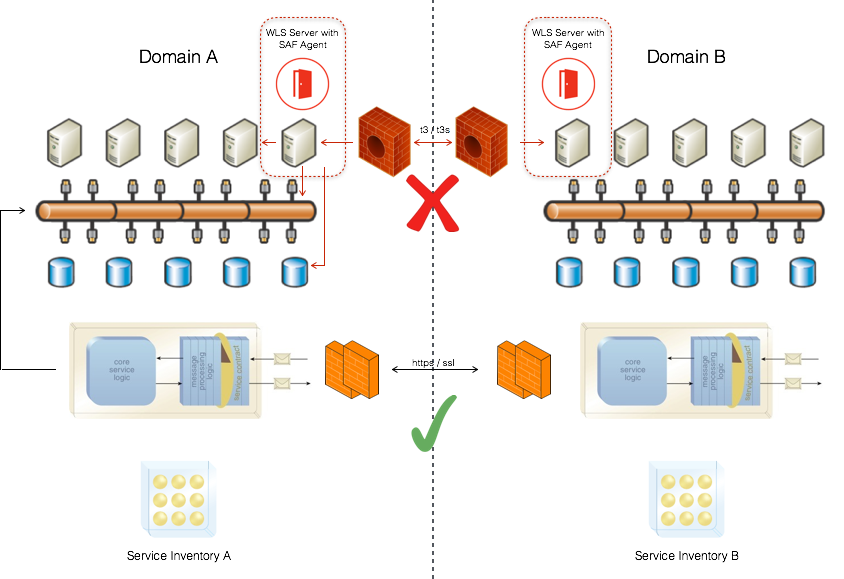 …and that’s all I have to say about that; I certainly hope you found the post interesting and useful, thanks for reading!!